Reading my way through the Mattie Winston series and was going to add the next book to my currently-reading list on Goodreads and discovered I....already read it?

So I thought, must be a glitch or something.  But no, there's a review?

WTF? I have no memory of having read it! Now, you may be saying to yourself "Well, you do read a lot..." but I usually remember books I enjoyed.

I must be getting old. I don't know why it took so long for me to hear about this series, but I'm happy I found it! Laugh out loud funny and suspenseful, it was impossible to put down. In fact, I started this on audiobook and it motivated me to get out for my daily walk, but switched to the Kindle copy because it was so good, I just couldn't wait any longer to finish it!

Mattie is equal parts hapless and unflappable, with a positive attitude that I really enjoyed and appreciated. Despite the setbacks of her failed marriage, her cheating husband accused of murder and quitting her job, she took it all in stride and kept going, no dwelling on a pity party for our Mattie. The other great characters made the book even more enjoyable, from the hairdresser at the funeral home to Joey the superhero to Izzy and Dom, I loved every one of them (well, except the reporter. Why does there always have to be an annoying reporter? Ugh.) The smoldering on/off romance was amusing and a tad overdone, but I enjoyed it anyway. I really liked the forensics trivia tucked in there (I'm a sucker for that stuff) and the well-crafted plot had plenty of surprise twists and turned up suspect after suspect, ending with a bittersweet unexpected revelation at the end. I didn't pick up on who the murderer was until just before the exciting (and slightly hilarious) ending. Altogether, this was an excellent start to a series and I'm already well into the second book. Outstanding!

I got halfway through this on audiobook over the last few weeks while I walk every day and frankly, I just can't wait to get through this any longer, it's just too good! I got to the part when she was outraged that everyone wanted their usual burgers and fries rather than the quinoa and lentil salad and by that point I realized this book was entirely irredeemable. 0 stars This is the third book in the Oakwood series, I loved the first two, so I was really excited to read #3. I adore how well written this series in, from the creative and twisty plots to the lovable characters, and this one was no exception! Very nicely plotted, with two murders that occur just steps from Charley’s front door. After a new family moves in next door, Judith’s adult daughter, Sarah, is found murdered. Later, Judith is found murdered in the street, the blame falls on a carpenter with ties to the family. Charley smells a setup and investigates into the family’s past and uncovers several secrets. With a few mini mysteries to solve along the way (I loved the revelation of who was behind the advice column and I don’t think they should stop!) to the person responsible for the vandalism delaying the expansion at Charley’s vintage shop, Old Hat (which was puzzling, not puzzling as in whodunit but puzzling as in *scratches head* whaat?) and there were many surprise twists that kept things interesting right up to the exciting ending. Wholly enjoyable and entertaining, The Advice Column Murders is another great addition to this excellent cozy series.

Kylie Logan's books have always been hot/cold for me but my first impression of this one is 98% negative (Sophie being the only reason I'm hanging on) The main character, Laurel, is a self-absorbed narcissistic snob who turns her nose up at everything and even takes great pains to point out to strangers that she's not actually related to the sister of the woman who graciously took her in as a foster child.  I can't understand why anyone would write such an unlikable and annoying main character.  I'm giving it about another 10% and if it doesn't improve, I'm done with a 0 star rating.  Ugh!

Is it just me?

Is it just me, or are there fewer mystery books to request on Netgalley the last couple of months? It used to be that the first of every month, there'd be dozens of new titles, now it seems like there's just a few a week.  My Netgalley addiction is jonesing for a fix and the dealer is out of stock.  *sigh* This was entertaining and lovable, and I'm definitely a fan of the series after reading this! There's just something about this book that grabbed me from the first page, I fell head over heels into Molly's world; her excitement at living in France, seeing it all for the first time, it felt like I was seeing it too (I've never been to France, so I enjoyed exploring the countryside through her eyes.)  Maybe it was the colorful characters or the beautiful setting, all drawn as rich as French food. Maybe it was the easy way the story progressed, with the characters evolving with the story.  I liked how effortlessly it segued between the point of views of several of the characters and even how it segued between the French and English characters. The intriguing plot, surrounding the disappearance of a local art school student, had many suspects and I didn't suspect who the murderer was until the very end of the book, just before the MC did.  Very well crafted! The only criticism I have is the ending wasn't entirely satisfying.  At the pivotal point, the action cut off, then went to Molly telling everyone what happened. It was a bit of a let down for me, but not enough to put me off the series. Loved it!

Too Many Crooks Spoil the Plot I really enjoyed this one, it was relatable, realistic and inviting. The characters really made it for me; warm, true to life and charming, from```the capable Ditie, stepping up to take in Ellie's kids to the sassy Lurleen to the sweet romance between Ditie and Mason, I found myself roped in from the first page. Lurleen is really the one I want to know more about, her back story was hinted at several times in the book and I'm looking forward to learning more about her. The suspenseful plot kept me glued to the pages, the corporate espionage angle was interesting and intriguing (I want to try that product!) but I have to say, that ending....I'm not sure what I was expecting, but it wasn't that. It was a little convoluted. Not bad, just a bit confusing who was one what side. Also, the TSTL moment by one of the characters at the end just felt a bit unrealistic (I don't want to spoil, but jeeeeez.) But it was a great mystery and an edge of your seat and the recipes included at the end of the book sound delicious and there's a couple I can't wait to try. An excellent start to a new series and one I'll look forward to reading more of in the future. I'm going to give this series one more chance. I looked at my reviews for the first 2 books and both said the same thing; too much filler to make up for a plot that wasn't enough to span the book. Fingers crossed that this one is better.

I've just started this book and already I think the MC is an unlikable bitch.  Is it worth continuing? 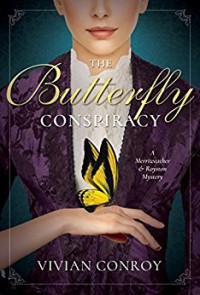 A captivating historical cozy mystery, The Butterfly Conspiracy is an excellent debut to a new series! Suspenseful and thrilling, I was immediately sucked into the Victorian world superbly created, with intriguing characters and a puzzling plot that kept me turning pages.

I liked the dynamic between Royston and Merula. She's wasn't a passive Victorian flower, he wasn't a man strong-arming her into being a passive Victorian flower. Although the possibility for a romance was hinted at, it wasn't overt and took a backseat to the plot. I appreciated that, just like in food, the best flavors are in the background as an enhancement. It also leaves the door open to future story lines, and I look forward to seeing how their relationship develops.

The plot was intriguing; at a zoological meeting, Merula unveils the exotic butterfly she has cultivated. Because she is a woman, Merula's Uncle Rupert agrees to take the credit, but when a woman dies after the butterfly lands on Lady Sophia's arm and she falls over, dead, Uncle Rupert is accused of murder. Determined to clear his name, Merula teams up with Lord Royston, uncovering many motives and suspects while pursued by the police. I have no idea if the method of death is feasible or not, but it wasn't something I've ever seen before and really enjoyed it, as well as the surprising and exciting ending. This one didn't have as strong of a plot as previous books, but it was still enjoyable and although the culprits in the mystery were known, the reasons were a surprise. But it's always fun to catch up with the Markham sisters and a great read to curl up with for an evening.

This will bankrupt me

There's a whole line of book-themed scented candles at Amazon! 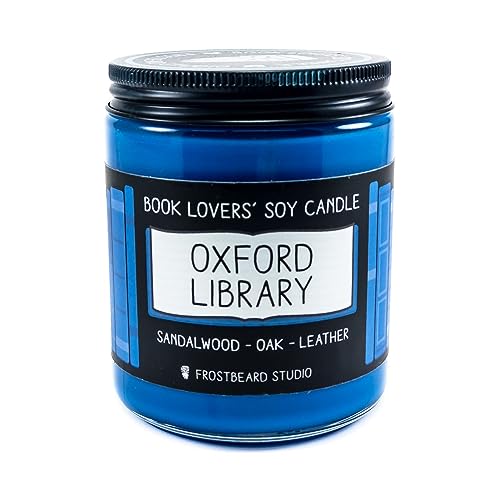 I went on an Diana Xarissa binge this month?  So cute and charming and now I'm nearly caught up on all 3 of her series.  They're such easy reads to while away an evening.  Definitely recommend for cozy fans!