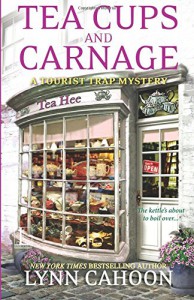 Tea Cups and Carnage is the seventh book in the excellent Tourist Trap Mystery series and shows no sign of slowing down.  There's a new shop owner in town, Texas beauty queen Kathi is set to open Tea Hee, a shop specializing in custom teas and tea sets.  South Cove is just entering the tourist season with a beach festival weekend when a man is found dead in a motel just outside of town.  Kathi and her sister Ivy are under suspicion and Jill works to clear them and find the real murderer.

First of all, I really liked Kathi.  I think she'd be a great sidekick and BFF for Jill, unlike Darla, who just pumps her for information to report in her small newspaper, and Amy, who is kind of annoying.  So I have high hopes that there is more of Kathi as the series goes along.

This series never disappoints, and this book was no different.  There were several plots woven into the story, so the pace never let up.  From the missing money to the mysterious sister to the murder, there was always something going on.  I enjoyed that some of the minor characters were fleshed out a little more; it was nice that more dimension was added to the characters that frequently pop up in the series.

Also, whatever happened with the old mission?  In the last few books, it has merited little or no mention.

Overall, another great addition to a great series. This book can be read as a standalone, but I recommend reading the whole series because it's hard not to fall in love with South Cove.