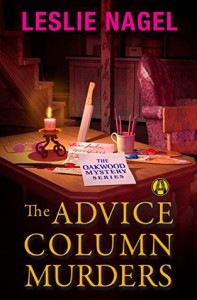 This is the third book in the Oakwood series, I loved the first two, so I was really excited to read #3. I adore how well written this series in, from the creative and twisty plots to the lovable characters, and this one was no exception! Very nicely plotted, with two murders that occur just steps from Charley’s front door. After a new family moves in next door, Judith’s adult daughter, Sarah, is found murdered. Later, Judith is found murdered in the street, the blame falls on a carpenter with ties to the family. Charley smells a setup and investigates into the family’s past and uncovers several secrets. With a few mini mysteries to solve along the way (I loved the revelation of who was behind the advice column and I don’t think they should stop!) to the person responsible for the vandalism delaying the expansion at Charley’s vintage shop, Old Hat (which was puzzling, not puzzling as in whodunit but puzzling as in *scratches head* whaat?) and there were many surprise twists that kept things interesting right up to the exciting ending. Wholly enjoyable and entertaining, The Advice Column Murders is another great addition to this excellent cozy series.